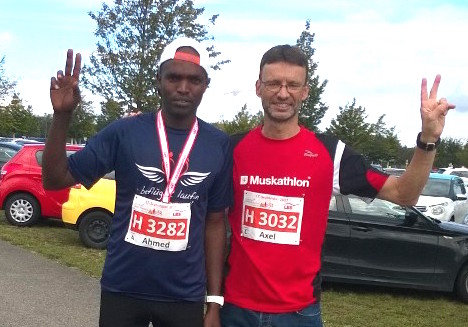 Ahmed loves to run. When he was unable to participate in a language course due to problems with his eyesight, Ancora wondered if there might be a German runner who would be interested in running with him to help him practice speaking German while they ran. As it turns out, there was.

Axel has been training Ahmed now since the beginning of July. They set a target of the Frankfurt marathon on Oct. 29 — Ahmed’s first-ever marathon.

In spite of a foot injury less than two weeks before the marathon, then battling blisters during half the marathon, Ahmed successfully completed the race in a time of 3 hours and 25 minutes. It was a great result for his first marathon and a major accomplishment to have finished the race. Ahmed and Axel should be very proud of the hard work they have put into training, both in running and in German language.

In reflecting on the marathon and on his training, Ahmed shared that he is tremendously thankful for Axel and the kindness Axel has shown to him, as well as for Ancora’s support to bring them together. For Ahmed, running is a way of relieving stress and freeing his mind, but running together also provides the opportunity for friendship and learning a new language. After a short break to recover from the marathon, Axel and Ahmed look forward to carrying on and setting their next goals together.